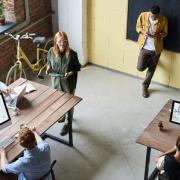 [Editor’s note: This article is derived from the book, Happy to Work Here: Improving the Culture of the Workplace, by the six Principals of the Atlantic Systems Guild: Steve McMenamin, Tom DeMarco, Peter Hruschka, Tim Lister, James Robertson, and Suzanne Robertson. The following is excerpted from the introduction, along with details of the first cultural driver described in the book.]

Anyone responsible for a complex team endeavor is aware that the methods in use, the technology, and the work ethic don’t provide a complete expla­nation for why people and teams perform as they do. There is something else at work; that something else is its culture.

You often hear allusions to it: “The culture of this place just didn’t allow us to make that change,” or “It was the culture that lost us some of our best people.” But when asked to explain just what the culture is, or even what the term “workplace culture” really means, most people come up blank.

Books and articles that extol the virtues of an organi­zation tend to feature companies that are models of a wide range of constructive and successful practices. Autopsies on notable failures often find that their subject companies were doing many dysfunctional things all at once. The literature might reasonably lead you to believe that organizations are distributed bimodally: either with lots of good things going on or lots of regrettable policies and practices.

Such analyses may be entertaining, but not obviously useful to those seeking to improve the culture of their own workplaces. It doesn’t take sophisticated analysis to determine that one place is a train wreck, while another is a virtual showcase of best practices with an impressive track record to match. It’s pretty obvious. But very few real-world workplaces exist at either of these extremes. The same is true of their cultures.

Most workplaces are mixtures of good and bad cultural traits. They get some things right but are still bogged down by other, less admirable cultural characteristics. They are not textbook models of anything. They are a messy mix of the constructive and the dysfunctional.

Seeking to achieve good culture and avoiding the bad requires a deeper look at the factors that determine the culture of a workplace.

Culture is a set of shared beliefs and resultant observable behaviors.

In our work experience and observations of hundreds of workplaces around the world, we have encountered a variety of behaviors among the people in different workplaces and, most often, have been able to relate these behaviors to underlying shared beliefs within the workplace. Sets of shared beliefs that encourage desirable behaviors1 are what we call cultural drivers. This aggregate of cause and effect is shown in Figure 1.

There are six principal drivers of a healthy workplace culture. It is our expectation that, by under­standing what it is that drives different aspects of workplace culture in general, you will be able to understand the culture at your own organization and, more importantly, change it for the better.

The six drivers that determine most of a workplace’s culture are set out below:

The order is relevant here, as some of the later drivers are influenced by the earlier ones. We predict you’ll be best served tackling the drivers in your own organization more or less in the order shown above.

Of course, these six drivers cannot account for all of the rich variation among workplaces, but they do account for most of it. By focusing on the drivers and their contribution to good cultural mores, you are more likely to understand the culture of your own workplace. The drivers should in turn help you move toward the workplace culture you want.

Steve McMenamin
Steve McMenamin was Senior VP and CIO at Hawaiian Electric Company prior to becoming a Principal of the Atlantic Systems Guild. He also held executive positions at Borland Software, BEA Systems, and Southern California Edison Company. Mr. McMenamin was coauthor with John Palmer of the book Essential Systems Analysis, where he introduced the concepts of essence and business event modelling. He passed away on 20 November 2019.

Tom DeMarco
Tom DeMarco is a Cutter Consortium Fellow. He served on the Editorial Board of Cutter IT Journal (now Cutter Business Technology Journal) for more than 2 decades. Tom has been a frequent keynoter and moderator at Cutter Summits. Mr. DeMarco is a principal of the Atlantic Systems Guild. He was the winner of the 1986 Warnier Prize for "lifetime contribution to the field of computing" and the 1999 Wayne Stevens Prize for "contribution to software… Read More

Peter Hruschka
Peter Hruschka is a Principal of the Atlantic Systems Guild. As a trainer and consultant, he concentrates on business analysis, requirements engineering, and system and software architectures, preferably in the embedded world. Mr. Hruschka loves to be involved in developing products that combine software with hardware, electrical, and mechanical components – thus creating interesting systems in domains like medical systems, automotive,… Read More

Tim Lister
Tim Lister is a Fellow of the Cutter Business Technology Council and a Senior Consultant with Cutter’s Business Technology & Digital Transformation Strategies and Business Agility & Software Engineering Excellence practices and a member of Arthur D. Little's AMP open consulting network. He is also a frequent keynoter and moderator of the Cutter Summit. Mr. Lister, who has more than 40 years of professional software development… Read More

James Robertson
James Robertson is a Senior Consultant with Cutter Consortium's Business Agility & Software Engineering Excellence practice and a Principal of the Atlantic Systems Guild. He currently advises companies on how to adapt modern software development techniques to fit specific projects and how to effectively transfer the new technologies to the software developers within the organization. Recently, his research has focused on the development of … Read More

Suzanne Robertson
Suzanne Robertson is a Senior Consultant with Cutter Consortium's Business Agility & Software Engineering Excellence practice. She is also Principal and founder of the Atlantic Systems Guild. Ms. Robertson’s work includes research and consulting on the management, sociological, and technological aspects of requirements. Volere, the product of her research, is a complete requirements process and template for assessing requirements quality and… Read More
More Articles Like This
The Agile Digital Culture
Developing an Experimental Culture
The Workplace Culture You Want
You're Doing It Wrong: How Your Decision Making Increases Uncertainty & What to Do About It
How Does Culture Drive Organizational Agility Success?
New Research
Copyright © 2021 CUTTER CONSORTIUM  |   All Rights Reserved. Privacy Policy | Terms of Service