Yes, Disruptive Technologies Really Can and Do Change Everything! 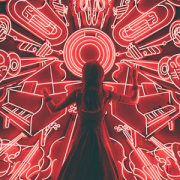 Disruptive technologies unleash tremendous creativity, with effects far beyond the initial change. An IBM executive in 1955 opined that seven IBM 704s would meet the world’s computing needs. He might have been right if the only things we ever automated were the calculations actually being done in 1955, and nobody ever thought of anything else worth automating. But they could and did, and in the ensuing 65 years, multitudes of products, services, processes, and business models would be rendered obsolete. Companies that didn’t adapt went away, got absorbed into others, or became ghosts of their former selves. (Only one of the 30 companies that comprised the Dow-Jones Industrial Average in 1970 remains there today: Procter & Gamble.)

While we think mostly about disruption in the marketplace, new technologies inevitably disrupt existing internal processes as well, though that can take a while, as barriers to clear thinking delay the disruption. For example, in some places, early automobiles had to be preceded by a person on foot or horseback with a warning light and bell. Ridiculous as this seems, there was a parallel in IT, of all places. For too many years, organizations simply automated business processes that were developed before IT rather than thinking how to redesign those processes to take full advantage of the technology. The meager benefits this approach produced inspired the reengineering movement of the 1990s, when IT really began to disrupt processes. We finally saw the long-promised dramatic productivity growth when we designed totally new ways of doing business around online, real-time IT and the Internet.

Most important from a business perspective, new entrants can come from left field; they might even be in totally different industries. The history of the recorded music business over the last few decades is highly illustrative. For years, we bought vinyl records that could only be played in a building with electricity. Then we got audio tapes that could be played anywhere on battery power, albeit with some sacrifice of sound quality. Then CDs came along; at first, they seemed like just another physical medium, portable like tapes plus offering much better sound. But there was a big technological difference: the sound was digitized, not analog. As such, it could be stored on one’s computer and, more important, could be loaded there via telecom — no physical medium — enabling Apple to become for a time the largest distributor of recorded music without ever having to burn or store or even look at a single CD. The company leveraged its technical capabilities to integrate its computers with the iPod player through the iTunes software. In just a few years, online distribution of music destroyed mass-market record shops’ reason to exist. (The exception is shops selling used media and new vinyl, the medium whose obituaries proved premature as CDs have ironically become obsolete instead. Aficionados claim vinyl sounds better, which is plausible given that music is inherently analog.)

The story does not end there. The next disruption came from broadband, which enabled us to listen to streamed music without waiting for a download. We just select what we want to hear by accessing a subscription service that may incorporate a feedback feature to capture our reaction to music related to our request but which we did not specifically ask to hear. Our answers feed machine learning algorithms that try to predict what we might like from music we may not have even known existed. Not surprisingly, these services were originated by new entrants like Pandora.

A CIO needs to think about disruptive technologies in terms of three actions:

The simple truth is that few enterprises will have both the opportunity and the capacity to launch disruptive technologies themselves. However, some obviously do when they have an idea that seems to meet people’s needs or wants better than what is currently on offer. There are traps here. We must not be too subjective. Just because we can’t answer the “Why on earth would anybody want to...?” question doesn’t mean there is no answer. Facebook and Twitter would have gone nowhere if they depended on initial acceptance by people over 35. Another trap is seeing in the future only what we expect or want to see (as in Bill Gates’s 1995 book The Road Ahead, which missed the significance of the Internet).

Successfully creating disruption requires more than just ideas and technical capacity; there's also cultural capacity. When carrots for success are much smaller than the sticks for failure, risks aren’t taken and innovation doesn’t happen. When many people can say “no” to an idea and make it stick (especially people in staff organizations rather than the line of business that generated the idea), innovation rarely occurs.

The new trick old dogs need to learn is to think creatively about what their enterprise actually does for its customers and how those needs could be otherwise met, perhaps by someone from a completely different industry or a brand-new enterprise. Specifically:

Apart from avoiding inertia and complacency, a major lesson in these cases is to fight the fear of cannibalization. One of the biggest strategic blunders enterprises make is trying to avoid cannibalizing their existing products or business models. Inevitably someone else comes along who implements the new model, and by the time the danger is clear, the margins are no longer there to support the investments necessary to stay in the game. Each of these tales is one of lost opportunity due to complacency, lack of imagination, or deeply flawed strategy — if a strategy existed at all.

Enterprises have every right to expect their CIO to think creatively, not just about how they can effectively use technology themselves, but also how somebody else could use technology to destroy their business.

Just as only a few enterprises will introduce disruptive technologies themselves, most others are not as existentially vulnerable as the unfortunates above. That doesn't let the CIO off the hook, however. Embracing disruptive technologies that offer possibilities for finding new customers and taking better care of existing ones can make a big difference, especially if it becomes a standard way of doing business. Recent focus on the customer experience is part of this trend. Of course, committing serious money wisely requires awareness, selectivity, and flexibility.

A CIO must keep up with new ideas but not be overly impressed with everything that hits the media. Technological churn is costly, both financially and politically, for the CIO. In reality, being second or third or later with a new wrinkle (e.g., presence on Facebook or Twitter or even the Internet, back in 1995) is not necessarily a problem. It can even help as we can learn from the mistakes of the pioneers.

To justify investment in technology X, there should be good answers to questions such as:

The big lesson for CIOs is to maintain an external focus, ever on the alert for threats and opportunities. Running a smooth and efficient IT shop is necessary for success but nowhere near sufficient.