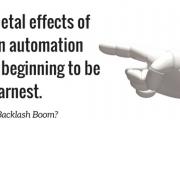 Electronic devices incorporating artificial intelligence (AI) software are the reportedly hot technology at this year’s Consumer Electronics Show in Las Vegas. The rapid movement of AI-driven automation into devices — be they toasters, home assistants, or automobiles — portend societal changes that are already well underway, and will likely affect every one of us ― perhaps in ways we do not yet fully appreciate.

Take, for instance, the recent changes in the political direction of both the US and UK, and potentially in other Western countries. Many analysts attribute the change to the rise of globalized trade and the outsourcing of work. Even pro-trade economists like Russ Roberts admit that while creating economic benefits, globalized trade has also created “undeniable human costs ― dislocated and unemployed workers, some of whom struggle to find dignified ways to support themselves and who may be left with dreary lives without meaning.”

It is these displaced workers, it is asserted, who have decided that the benefits of globalization — namely, a general increase in Western economies’ living standards in the longer term — are not worth the personal financial and social costs to themselves and their families in the short-to-medium term, which often stretches a decade or more. Therefore, the argument goes, this group has successfully voted as a bloc to get rid of those in power that support globalization and outsourcing.

There are other analysts, however, who argue that globalization is only a minor reason for the increasing numbers of displaced and disgruntled middle-class workers in Western societies. The real cause, they argue, is the rise in automation. For instance, Harvard economist Lawrence Katz, in talking about automation’s responsibility for creating job losses as opposed to the role of globalized trade, says that, “Over the long haul, clearly automation’s been much more important ― it’s not even close.” A study by Ball State University reinforces Katz’s point: it found that while 13% of US manufacturing job losses were due to trade, 87% were due to improvements in automation.

Amazon is a leading indicator of what may come for service industries. In 2012, Amazon purchased Kiva Systems, a maker of warehouse robots, for US $775 million. The company began deploying the 320-pound, 16-inch-tall robots to its warehouses in early 2014, with some 10,000 of them operational by the end of 2014. Analysts estimated then that each robot replaces 1.5 full-time-equivalent human beings. Over the past two years, Amazon has added another 30,000 Kiva robots to its warehouses, as well as increased the productivity of its warehouse activities through additional automation initiatives, which allowed it to ship over 1 billion items between 1 November and 19 December 2016. While it may still be some years away, nearly completely automated Amazon (and other companies’) warehouses are seen as inevitable.

Clearly, Amazon’s automated warehouse efficiency has other consequences. It has enabled Amazon, through its online sales channel and ability to discount prices, to become the world’s eighth largest retailer (and largest online retailer). Amazon increasingly is taking market share away from traditional department stores, helping place companies like Sears, Kmart, and Macy’s, among many others, at risk. All three announced significant store closures and layoffs this past week, with Macy’s alone eliminating 10,000 jobs after disappointing holiday sales attributed to increased online sales competition. Macy’s management says it will take the savings from the layoffs and invest it into its online presence.

How many of those employees that Macy’s and other retail companies laid off will be able to find comparable work at the same salary is unknown. However, it is unlikely for very many, as few retailers that are under threat by Amazon and other online retailers are hiring permanent staff. Instead, like Macy’s, they are looking for ways to shed staff while they increase their online presence to combat Amazon and other ecommerce discounters.

With Amazon’s push into grocery stores without checkout lines, the food retailers have been put on notice that they are Amazon’s next target.

To those who have lost their jobs, it matters little whether it is caused by globalization or automation, or a combination of both (globalization is empowered by automation, after all). They don’t see a way out, and their feelings of despair are fueling a growing backlash against technology, along with those companies they perceive as using technology to profit from it while condemning others to a “dreary life,” as Roberts states. It is not wholly unjustified, either. For example, because of the proliferation of trade agreements, between 1987 and 2008, total US corporate profits earned internationally rose by 347% (adjusted for inflation), yet US wages rose by merely 53%.

The potential for social blowback created by automation was a topic we explored in depth in our July 2015 Cutter Business Technology Journal issue, “Mitigating the Risks of Technology Backlash.”

The warnings raised in that issue have been raised again in a White House report released in December, titled “Artificial Intelligence, Automation and the Economy.” This report and its October 2016 predecessor, titled “Preparing for the Future of Artificial Intelligence,” caution that while, “AI-driven automation will continue to create wealth and expand the American economy in the coming years,” it will not be costless and will create major structural changes to the economy, society, and individual lives. It states that “aggressive policy action” will be required to help those negatively affected by AI-driven automation, which could amount to the elimination of conservatively 9% to as many as 47% of current jobs (i.e., over 70 million) by 2040. The report also points to the real prospect of creating “superstar-biased technological change, where the benefits of technology accrue to an even smaller portion of society” than today. This could lead to even greater levels of wage inequality, despair, and social unrest.

Those warnings aside, the report argues forcefully for an even greater push for the application of AI-driven automation. The reason given is that the benefits to be gained in the areas of “health, education, energy, economic inclusion, social welfare, transportation, and the environment” far outweigh the downside risks. The report, for instance, calls for a significant increase in the current non-defense $1.1 billion in annual federal funding for AI research (the US Department of Defense’s yearly AI budget is an order of magnitude larger).

While the report does outline a number of policy actions that should be considered to deal with the social consequences of AI-driven automation — such as pushing for more STEM education in schools, retraining of adults who lose their jobs due to automation, better access to unemployment insurance, increasing the health and social welfare safety net, and so on — it’s much less forthcoming about the totality of financial costs involved. For instance, the report buries in a footnote that the cost of retraining those losing jobs from globalization, outsourcing, and automation today needs to be at least $18 billion a year, some $15 billion above what is spent currently. In today’s political environment, that funding commitment is impossible to achieve, and companies that are using automation to eliminate workers aren’t going to invest in retraining those they just laid off, either.

Further, the report concedes that it doesn’t really know what new jobs the retraining would be for. It acknowledges that the jobs AI-driven automation are expected to create will likely require both hard technical and soft social skills far advanced above the skills the persons needing retraining currently possess, making their retraining challenging. The reason is that most of the initial jobs to be eliminated by AI-driven automation will be “highly concentrated among lower-paid, lower-skilled, and less-educated workers.” The report also admits that the jobs these displaced workers would be trained for would probably be more “gig”-type jobs than permanent hires, which brings about its own set of health insurance and housing problems.

Reading between the lines of the report, it is clear that in many cases, automation improvements to jobs will likely occur faster than individuals can be retrained to fill them. In other words, automation will create new jobs requiring significantly increased educational/knowledge skills. However, the time it takes for a person to learn those skills may take more time than the automation itself can be “taught” to incorporate them. The report basically throws up its hands at the consequences of that prospect, merely saying that the US government needs to be prepared for all contingencies. It does try to put a bright spin on it by saying that, if it does happen, all those people will have more time to pursue leisure activities.

The societal effects of AI-driven automation and the like are just beginning to be felt in earnest. The one thing that seems to be certain: over the next decades, companies and countries should be preparing for more political risk and uncertainty, and revamp their enterprise risk management approaches accordingly.

It will be interesting to see what the hot technology will be at the Consumer Electronics Show in 2025: perhaps AI-driven training devices to keep you one step ahead of the AI-driven devices looking to take your job that are planning to be shown at the show in 2026?

Robert Charette
Robert N. Charette is a Fellow with Cutter's Business Technology & Digital Transformation Strategies practice. He is also President of ITABHI Corporation and Managing Director of the Decision Empowerment Institute. With over 40 years’ experience in a wide variety of technology and management positions, Dr. Charette is recognized as an international authority and pioneer regarding IT and systems risk management. Along with being a… Read More
More Articles Like This
The Coming Backlash
The Coming Backlash
Lift the Mask of POSIWID
Waterfall Backlash
Coming to Your Team's Emotional Rescue
New Research