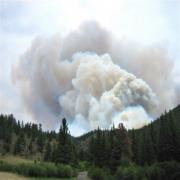 As the US and other countries continue to experience repeated record-breaking temperatures and widespread drought driven by climate change and natural resources management issues, government agencies and other organizations are turning to artificial intelligence (AI), used in conjunction with other advanced technologies, to prevent and fight wildfires. In addition, organizations are also using AI to help mitigate some of the economic fallout from wildfires. As we explore in this Advisor, this includes applications designed to:

When it comes to technologies associated with these applications, AI and machine learning (ML) receive most of the attention. In reality, however, these applications are only practical because of their use of other advanced technologies, including cloud platforms, Internet of Things–based sensors deployed in the field and in the air, satellite imagery, and analytics.

Some of the most important applications are designed for the early detection of fires and for alerting the proper agencies before fires can grow out of control. For example, this spring, Sonoma County, California, USA, added new, advanced fire-detection capabilities to its existing network of tower-mounted video cameras deployed in the field to spot early signs of fire outbreaks.

Unlike Sonoma County's early fire-detection system — which required humans to actively monitor live camera feeds — the new system is automated: video feeds are transmitted to a cloud services provider's platform running on Amazon Web Services, where they undergo ML analysis to compare images of detected smoke plumes to those stored in its database. The solutions provider, South Korea-based Alchera, says its ML models were developed using algorithms trained on more that 10 million images of smoke plumes.

Upon identifying a suspected fire outbreak, the system generates an alert — including the outbreak's location information (e.g., latitude/longitude) — which is sent to the Sonoma County fire and emergency center where dispatchers can take steps to verify that there is an actual fire, contact first responders, and initiate plans to contain the outbreak. Individuals at other fire departments and emergency agencies are also notified by the system.

Researchers at the US Department of Energy's Pacific Northwest National Laboratory (PNNL) are expanding PNNL’s operational Rapid Analytics for Disaster Response (RADR) image analytics and modeling application, which is designed to mitigate damages to key energy infrastructure caused by wildfires, floods, wind storms, and other inclement weather, earthquakes, and other natural disasters.

This upgrading involves adding image-capturing technology (e.g., satellite, airborne, and drone), ML, and cloud-based platform functionality to enhance the application with the ability to not only assess damage but predict it as well.

The goal is to enable RADR to accurately forecast the path of natural disasters in order to give first responders an early, and more detailed, heads up, so they can make better-informed decisions to reduce damage, carry out resource planning, and decrease the time required to restore key infrastructure. PNNL researchers cite the example of a wildfire, which, should it reach an electrical substation, might cause a widespread power outage that could impact an entire community and require days to repair. Consequently, forewarned with detailed information by RADR, disaster coordinators could assign such a facility to receive priority from responders to protect it from spreading fires.

The initial version of RADR (developed in 2017) is based on a change-detection algorithm for analyzing different types of satellite imagery and determining changes undergone to a landscape following a storm. According to PNNL reps, this tool is used to rapidly assess the physical impact of natural disasters — typically before ground teams can enter the disaster area. For example, authorities used this version during the 2016 hurricane season to evaluate damage and determine if energy infrastructure was damaged or at risk.

While the initial version of RADR proved its value, PNNL researchers decided to expand its functionality. One of the most important enhancements is the ability for the tool to access new image sources, which has sped up and increased the accuracy and detail of ground-level assessments. RADR can now utilize images from a variety of satellites with different sensing capabilities, including domestic and international government satellites that are offered as open data and commercial satellites that are available via the International Disasters Charter.

The ability to use multiple sources of overhead imagery improves response time to just a few hours, according to PNNL researchers. The key limitation is the latency associated with overhead imagery (i.e., the time between images being collected and becoming available for analysis). According to researchers, once imagery has been received, it only takes RADR about 10 minutes to generate an analysis.

Researchers have also added an infrared imaging capability that enables RADR to see through smoke caused by fires and cloud cover. This provides two benefits: users get a clearer view of the landscape, and responders get more detailed information they can use to assess damage to key infrastructure or for determining a safe location from which to launch relief efforts.

Researchers are also working on enabling RADR to integrate publicly available, crowdsourced images from social media. During a disaster, social media platform users typically post lots of content — including photos and descriptions of damage — to sites such as Facebook and Twitter. By combining overhead imagery with on-the-ground images, RADR can provide a more overall assessment. For example, researchers point out that while satellite imagery may suggest damage to a transformer or other electrical grid components, ground images may indicate otherwise. The goal is to allow RADR to be able to take these various images (including removing duplicates) and stitch them together to offer a more accurate view of changing conditions.

To predict possible outcomes of a wildfire, researchers are combining RADR's imagery analysis with weather, fuel, and forecast data. For example, PNNL researchers note that wind, vegetation, and anything a fire can consume all factor into the size of a fire and the direction it will take. By integrating imagery with fuel data and wildfire models, researchers hope to accurately predict the path of a fire.

Finally, PNNL researchers have implemented RADR as a cloud platform to provide users with “end-to-end” capabilities for accessing available imagery and for conducting analyses and disseminating findings via the Web and mobile apps. These findings are further bolstered with visual analytics, including images and data sets, specifically designed to be easily discernible by a range of planners and responders. Such capabilities are important because developing a disaster response plan requires coordinating local, regional, and national resources in different locations. Moreover, these resources require the data in formats that users can easily access and understand, whether they are in the office, in a vehicle, or in the field.

Drones are useful for preventing and fighting wildfires; however, their usage is heavily regulated by the US Federal Aviation Administration. The main issue with using drones during firefighting operations is the possibility they could interfere with human-piloted aircraft such as helicopters and water bombers.

One way to get around this problem is to use drones at night, when human-piloted aircraft are not operating. A good example is offered by Drone Amplified. Based in Lincoln, Nebraska, USA, the company develops and sells integrated drone systems, services, and data analytics for wildfire management. Their drone system IGNIS is used by various state and federal agencies, including the US Forest Service and Bureau of Land Management in California, Colorado, and Oregon to set prescribed burns (i.e., setting small fires to deny larger fires fuel needed to expand), map wildfires, and provide data to firefighters in real time.

IGNIS can operate at night and even through thick inversion smoke while avoiding hazards like power lines and other infrastructure. Even when flying in a smoke plume, it can relay telemetry such as infrared heat maps detailing fire lines and hot spots. In addition to being able to cover more area than firefighters on foot or in all-terrain vehicles, company reps claim that IGNIS is more cost-effective and safer than human-piloted helicopters, with the drone, a stock of batteries, and an infrared camera costing about US $45,000.

Another popular use of drones is by utility and other energy providers for inspecting and analyzing critical infrastructure in order detect and prevent wildfires caused by extreme weather, encroaching vegetation, and infrastructure failure. Here we are seeing increased usage of drones in conjunction with computer vision and AI-based analytics for automating the detection, classification, and reporting of hazards detected during aerial inspection of power lines, substations, pipelines, and other critical energy infrastructure.

The growing frequency and severity of wildfires in the western US has caused a number of insurance companies to reduce or abandon their involvement in the homeowners insurance market due to massive losses in profits.

This has created problems for homeowners located in wildfire-stressed areas due to a reduction of available insurance products, dropped policies, or high premiums associated with products that are being offered. California homeowners, in particular, have been impacted considerably by this trend. The problem became so bad that in late 2019 the State of California temporarily blocked insurance companies (for one year) from dropping customers living in, or adjacent to, zip codes impacted by wildfires.

To counter this problem, insurers are turning to AI-based platforms and services designed to accurately assess the risk to homes potentially exposed to wildfires. These solutions utilize satellite imagery and AI analytics to identify insurable homes within territories deemed too risky by other insurers. Examples of companies developing or utilizing such solutions include Delos Insurance Solutions, Zesty.ai, and Farmers Insurance.

Delos focuses on underwriting California homes typically deemed uninsurable (by other insurers) because they are located in wildfire-stressed areas. Delos uses satellite imagery and models based on ML algorithms to quantify a home's actual wildfire exposure, differentiating between exposed properties and properties that are in stressed areas but are far less exposed to wildfire. Basically, Delos's model identifies homes in stressed areas of California that cannot find insurance protection but are not highly exposed. Armed with this knowledge, Delos believes that underwriters can confidently insure homes that other insurance providers consider too risky.

Zesty.ai partners with insurance companies to insure homes and businesses. In June, Farmers Insurance received approval from the California Department of Insurance to use Z-FIRE to increase the homes eligible for its insurance products in high wildfire-risk areas in California. Farmers Insurance has integrated Z-FIRE into its homeowners insurance underwriting processes, in effect, selectively expanding opportunities for coverage for residences located in certain wildfire-risk areas. In conjunction with this approval, Farmers Insurance plans to introduce an approach to "help manage its statewide wildfire exposure by assessing individual wildfire risks to homes on a more granular basis while evaluating the company's overall wildfire risk exposure in various parts of the state."

The examples provided in this Advisor by no means represent all the ways that AI is being used to fight wildfires or protect against damages caused by such disasters; however, I do believe they offer a good overview of how organizations are developing and applying such applications.

I will keep you informed of important new developments around AI used to fight wildfires and other natural disasters. In the meantime, I welcome your opinions on AI for fighting wildfires and dealing with climate change in general. As always, your comments will be held in strict confidence. You can also email me at experts@cutter.com or call +1 510 356 7299 with your comments.