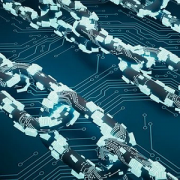 Since coming into prominence within financial services applications via technologies like cryptocurrencies and digital asset exchange, the race to find breakthrough applications in blockchain in other industries has been intense. However, despite major investments in knowledge, PoCs, and pilots, the results and value generated from these efforts remain modest, and it remains unclear whether blockchain technology really is the silver bullet that companies have hoped for. This is particularly true in the transport industry, identified early on as a promising area for blockchain applications due to its large number of independent but linked players, decentralized nature, and need to deal with issues like verifying authenticity and improving traceability and transparency, all while reducing transaction costs. In this Advisor, we share four cornerstones for executives in transport and many other industries to follow.
About The Author

Ingrid af Sandeberg
Ingrid af Sandeberg is a Manager at Arthur D. Little (ADL), based in the Nordic region, and a member of ADL’s Strategy & Organization practice, with affiliation to ADL’s Telecommunications, Information Technology, Media & Electronics (TIME) and Health Care & Life Sciences practices. She earned a master’s of science degree in accounting and financial management from the Stockholm School of Economics, Sweden. She can be reached at… Read More

Tomislav Andric
Tomislav Andric is a Manager at Arthur D. Little (ADL), based in the Nordic region, and a member of ADL’s Technology & Innovation Management practice. He earned a master’s of science degree in management and economics of innovation from Chalmers University of Technology, Sweden. He can be reached at consulting@cutter.com.

Philipp Mudersbach
Philipp Mudersbach is a Principal at Arthur D. Little (ADL), based in Central Europe, and a member of ADL’s Technology & Innovation Management practice. Mr. Mudersbach earned a master of science degree in international business economics from Maastricht University, the Netherlands. He can be reached at consulting@cutter.com.
Not a member? Gain Access to the Cutter Experts today — register now to read select open-access articles.
Member/Guest login Forgot your password?
New Research