Life and Data in a Time of Pandemic, Part IV 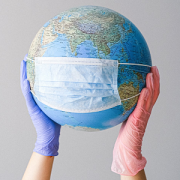 In these birthing days of 2021, hope springs — if not eternal, at least, widespread — in our ardent wishes “may the coming year be better than 2020.” Often qualified by the wry coda, “surely it cannot be worse!” we give voice to the fear that it may, in fact, be so. Our legal, muted New Year celebrations and illegal, rebellious New Year raves illustrate the extent of our dilemma: to carefully hope or live for the moment, knowing in our hearts that the virus neither respects nor knows of the increment in the highest-order count of our most common calendar.

As the first vaccines rolled off production lines in December, we thought we could see the light at the end of the tunnel. But, in the words of an old joke, it turned out to be an oncoming train in the form of two new and more infectious variants of the virus that arrived in tandem with the vaccines, triggering a storm before the longed-for calm. Around the world, multiple countries face a crisis at least as severe as and likely more dangerous than the peak of the first wave in early 2020 as people tire of social limitations, and health professionals simply tire.

With case numbers, hospitalizations, and deaths continuing to accelerate, one might expect an overarching plan and concerted effort to tackle the unfolding disaster. Yet the logistics of a turnaround seem to defeat western authorities. A US goal to vaccinate 20 million people by year-end 2020 reached a mere two to three million, and would “take almost 10 years to inoculate enough Americans to get the pandemic under control,” according to an NBC News report. The scale and complexity of this operation cannot be denied, but the reasons for its early failure are also clear.

The Trouble with Technology

During the past year, the application of technology to well-bounded problems proved its strengths in the impressively rapid R&D that delivered multiple vaccines in a previously unheard of time frame. Big data, analytics, and modeling played a major role in the success. As the virus mutates further and possibly more dangerously — as it is likely to do over the coming months, given the scale of the pandemic — we may hope that data and analytics will allow us to keep up. The value of pure and applied scientific research and the contributions of data science and information technology are undeniable, although the achievement may pose awkward humanitarian questions about why rampant, long-standing diseases in the developing world remain untreatable.

The challenging transition from R&D and production to distribution has, however, once again proven that project and change management issues are often more challenging than product development. Although the NBC News estimate of a 10-year rollout is probably best seen as scare mongering, there is little doubt that extensive and effective distribution will take much of 2021 in the western world, while developing countries will again be left at the back of the queue.

In addition to the logistical challenges of vaccine distribution, fighting the pandemic is most certainly suffering for the tsunami of disinformation inundating social media. In 2020, the casting of mask wearing and social distancing as key indicators in an imagined culture war by the outgoing US president and his administration has undoubtedly contributed “bigly” to America being first by far in the Johns Hopkins COVID-19 dashboard. This year, the impacts of widely spread disinformation about vaccines will almost certainly inhibit uptake in some segments of the population. Vaccination is already seen as an “attack on individual freedom” as well as yet one more way that the Illuminati are taking control of the populace.

The outlook is worrying. False claims about election fraud have likely weakened the incoming president’s ability to address the Coronavirus pandemic. “If only 20% of the population is like, ‘You’re not my president, I’m going to double down on my mask resistance,’ or ‘I’m going to continue to have parties over the holidays,’ that means we are going to be even less likely to bring this thing under control,” says Whitney Phillips, a Syracuse University professor of communications.

Like much of the western world, the US is suffering from a breakdown in a previously shared sense of reality, as conspiracy theories move into the mainstream and an increasing minority in society dismiss the need for government, democracy, and critical elements of social infrastructure.

Kate Starbird, a University of Washington professor who studies disinformation, has identified a model of “participatory disinformation” that is prevalent and particularly effective on social media. “Trump didn’t just prime his audience to be receptive to false narratives of voter fraud, he inspired them to create them … and then echoed those false claims back at them,” she said.

Attempts to counter such disinformation — populist propaganda — with facts, fact-checking, and belated flagging on social media are doomed to failure. They fail to recognize that beliefs are not rational or individually contestable. Belief systems are emotionally and socially based interconnected narratives. They provide a coherent (for the believer) filter through which all information is processed. Such filters are even powerful enough to convert contrary factual information into support for prior views.

Solutions to these problems are challenging and often depend on empathic, one-on-one, face-to-face conversations, a precious commodity in a time of social distancing.

This pandemic too shall pass. Or so we may assume, based on the historical record. Because of technology and despite disinformation, the crisis will come to an end, but its legacy will likely endure. In the short term, trends that have emerged in 2020 are set to continue.

In business, there have been winners, such as online retailers and delivery companies, and losers, such as airlines and tourism. Digital transformation, in the broadest sense of the word, now becomes a prime business strategy as online interaction replaces physical contact among employees, customers, and suppliers wherever possible. Expect increased focus on data collection, especially via the Internet of Things and modes that do not depend on human contact. Privacy concerns and security breaches by hackers will increase correspondingly. As the pandemic has proven, resilience is lacking in much of society’s processes today, from healthcare to global supply chains. Just-in-case thinking will need to be incorporated into the just-in-time and just-enough systems that technology has allowed us to build over the past decades.

Working from home will continue to find favor with both employers and employees and, although we may expect a more nuanced mix of office, remote, and home working in the future, it seems the pandemic will dramatically change the composition of city centers, commuting habits, and home design. As architect Norman Foster describes, a mix of disease and technology has driven the evolution of cities since time immemorial. Coronavirus, in this sense, is but the latest episode and is accelerating the changes that, in many cases, were already underway.

For the Web behemoths, such as Google and Facebook, there are indications that their era of unfettered exploitation of our personal data may be coming to an end over the coming years as both the US and EU begin to investigate and legislate against their potentially monopolistic practices. Such regulation cannot come quickly enough, but the wheels of justice grind slowly. Furthermore, true change will require the creation of new revenue models less dependent on — or, ideally, independent of — advertising.

In the “real” world beyond business strategies, I would like to believe that our lockdowns have demonstrated the possibility of a post-fossil fuel world. Sadly, the actual impact of even the most severe restrictions of 2020 has hardly registered as more than a temporary blip on the ever-upward curves of the climate crisis. Despite environmentally friendly promises by many governments to “build back greener,” practical actions have been largely lacking.

Continuing and increasing environmental degradation during the past year — often missed or unreported amid the panic of the pandemic — has led the WHO to warn (again) that this pandemic is probably not the “big one” that epidemiologists have been anticipating for many years. The lessons of Coronavirus have felt painful, but are we taking sufficient note of what is required to survive as a civilization in the face of a potentially more deadly plague? Are we even thinking about the zoonotic root causes of these emerging diseases and the need to stop our rapacious exploitation of the natural world if we are to reduce the risk of a repeat performance from Mother Nature?

What of life and data in a time post-pandemic? Life will go on and data will continue to grow — at least until the climate emergency no longer permits. Simply put, the challenge we face is to ensure that the data we collect and analyze promotes a better life for all on this planet, rather than increasing the imbalances and driving the dysfunctional behaviors that characterize human life today.

Barry Devlin
Dr. Barry Devlin is a Senior Consultant with Cutter’s Data Analytics and Digital Technologies practice, a member of Arthur D. Little's AMP open consulting network, and an expert in all aspects of data architecture, including data warehousing, data preparation, analytics, and information management. He is dedicated to moving business beyond mere intelligence toward real insight and innovation, complementing technological acumen from informational… Read More
More Articles Like This
Life and Data in a Time of Pandemic, Part II
Life and Death in a Time of Pandemic, Part I
Life and Data in a Time of Pandemic, Part III
Architecting Data Lakes, Part IV
Adoption Trends for Data Breach Remediation Plans
New Research
Copyright © 2021 CUTTER CONSORTIUM  |   All Rights Reserved. Privacy Policy | Terms of Service