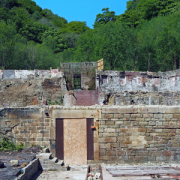 Christine J. Miller, Benjamin J. Langey, and Scott E. Bush take innovation to the broken places on planet Earth by showing the opportunities for collaboration when endangered species colonize ecosystems on contaminated lands. Protected status need not be an obstacle to development if stakeholders engage in honest dialogue and science supports proposed interventions.

Legacy industrial sites can be found across the US. In places where industry once thrived, supporting a growing economy and global war efforts through the 1960s, a paradigm shift in global manufacturing processes took hold in the 1970s and 1980s. For instance, there was a dramatic decrease in US manufactured steel during the late 1970s and the 1980s.1 The resulting global restructuring of the steel industry led to abandoned mills, leaving behind large tracts of contaminated industrial land.2

Commonly referred to as “brownfield sites,” these properties pockmark major US riverways and urban transport hubs and host a plethora of environmental contaminants. Brownfields are defined as “underutilized properties where the presence or potential presence of hazardous substances, pollutants, or contaminants complicates expansion, redevelopment, or reuse of the properties” by the Pennsylvania Department of Environmental Protection.3

There are an estimated 450,000 to 1 million brownfield sites in the US.4 They are often located within major US urban areas and have established access to transportation, being located near waterways and/or rail lines. With a growing demand for housing and infrastructure to support a fast-paced e-commerce economy, these sites are highly desirable.

Legacy industrial site redevelopment is commonplace in the US, especially along the Eastern Seaboard, a stronghold of former industrial sites. These once-robust economic centers have been underused for three decades or more, and their existence has been identified by stakeholders in both the public and private sector as holding essential real estate value.

Demand for housing in and around urban centers, which were once heavily industrial, has dramatically increased since the mid-1990s.5 In addition, the rising e-commerce industry requires a robust network of warehouse distribution centers. Consequently, legacy industrial sites are in high demand by developers for light industrial, commercial, and residential redevelopment.

Common obstructions to reutilization include environmental contamination cleanup activities and site-preparation costs.6 However, one factor often overlooked when planners and developers consider brownfield sites is the potential for encountering protected species or their habitats.7

Many of these sites have undergone a level of ecological succession during decades of unuse. This, combined with their proximity to major waterways, makes them prime locations for occupation by endemic (local) species. Historic habitat loss and development pressure have resulted in limited available habitats for local wildlife in urban centers. Due to natural succession creating early successional cover types, endemic species are often found utilizing brownfield sites, along with nearby natural habitats.

Although legacy environmental contamination remediation is generally well studied and understood, there are important nuances in balancing site redevelopment with conservation of local biodiversity and critical habitats. Every site is unique, but the intersection between environmental site remediation, site redevelopment, and biodiversity conservation can be successfully navigated and benefit industry and society if there’s concerted stakeholder effort throughout the process.

In this article, we provide an overview of brownfield redevelopment through the lens of biodiversity and species conflicts. Subsequently, we present a case study illustrating the remediation and redevelopment of a legacy industrial site while meeting the regulatory requirements to preserve protected species and their habitats.

Despite being man-made and degraded, these areas contain favorable wildlife habitats that are subject to colonization by endemic species (e.g., herbaceous and woody plants, mammals, fish, waterfowl, amphibians, and reptiles) from adjoining natural areas. In some instances, site redevelopment requires special attention to state or federally threatened or endangered species.

The Endangered Species Act of 1973 codified the protection of species at risk of extinction due to the “consequence of economic growth and development untempered by adequate concern and conservation.”8 Aside from regulatory requirements, a major reason for taking measures to protect species on a legacy industrial site is that in protecting the species, society is choosing to conserve the habitat in which the species resides and, in so doing, protect or enhance associated ecosystem services. For instance, aquatic water bodies, and more broadly wetland habitats, provide US $26.4 trillion per year of ecosystem services; aggregate studies estimate global ecosystem services loss at rates ranging from of $4.3 to $20.2 trillion per year, driven primarily by land use change.9

One important ecosystem service provided by wetlands is flood mitigation and storm surge buffering. Most wetlands, but especially large wetlands along major rivers, naturally act to attenuate floods and lower site flood risk, potentially saving businesses millions in the construction of levees or flood walls, flood damage, and flood insurance.10 Wetlands also give local communities opportunities to actively manage them for public access and enhancing habitats for protected species. Brownfield site redevelopment not only promotes reuse of previously developed and contaminated land, it can also be an economic driver for inclusion of habitat enhancement projects within the overall redevelopment plans.

Although on-site habitats on legacy industrial sites are typically man-made and degraded, they often contain suitable habitat for a variety of species, some of which may be legally protected.

Generally, all states incorporate pre-construction screening requirements for protected species. Parties seeking to develop land, either brownfield or greenfield, must complete an initial screening process to determine potential conflicts with threatened, endangered, or special-concern species. If the initial screening reveals a potential conflict, the presence or absence of the species in question is determined by conducting species-specific habitat assessments and, if suitable habitat is present, presence-absence surveys. If no potential conflict is determined, there is no requirement to complete such surveys.

Proposed redevelopment projects are generally required to comply with all state laws for remediating legacy contamination to some level of human health and ecological risk standards. During remediation and redevelopment activities, alteration or elimination of man-made habitats occupied by endemic wildlife may be necessary.

Depending on the species in question, the habitat being altered, and the governing resource agency, different approaches can be considered to allow the redevelopment of the brownfield site, despite a species conflict. In certain cases, some parts of a brownfield site may have to be left undeveloped.

Examples include natural wetlands or streams that don’t require remedial work and certain habitat types that might not be able to be replaced. However, for many fauna species occupying degraded man-made industrial habitats, governing resource agencies require a project proponent to capture and relocate any native species from occupied areas prior to remediation or redevelopment.

Engaging stakeholders early in the planning process is critical to meeting project objectives. Stakeholders usually include the project proponent, their engineering and environmental professionals, and regulatory agencies. Reaching a consensus between the stakeholders early in the process on project objectives, design considerations, and species avoidance and conservation requirements up front allows the redevelopment to proceed in a predictable manner desirable for all.

Independent of regulatory requirements, many large corporations that engage in brownfield redevelopment have their own corporate biodiversity and sustainability goals, often certified by third parties like the Wildlife Habitat Council (WHC).

On-site investigations confirmed that man-made water bodies were occupied by RBCs, having entered these areas via overland travel from nearby aquatic habitats. Identified at the screening stage, the project proponent proposed several site redevelopment plans, exploring options with stakeholders and agencies to mitigate the loss of man-made industrial habitats by replacing or avoiding them. These development scenarios minimized habitat disturbances in natural areas while allowing development to proceed in previously developed industrial areas on the site.

As is typical of large projects, some of the man-made industrial open water areas had to be eliminated to accomplish the project goals. Although these areas are man-made, RBCs and other aquatic species were able to colonize the degraded habitats. Due to the RBCs' protected status, avoidance measures had to be implemented for remediation and redevelopment.

Recognizing the special circumstances regarding this site, the agencies agreed to avoidance measures dictating the relocation of all native species from man-made industrial waterbodies to natural habitats nearby. For the unavoidable habitat loss, compensation was provided in the form of habitat creation or enhancement. All these activities required state and federal permits, which could be obtained through early stakeholder communications and project planning transparency. This allowed the project to proceed while protecting the animals and their natural habitats. The salvage and relocation were conducted in accordance with regulatory agency guidelines.

To understand the effort involved in planning for and executing these types of activities, it is useful to understand the methods. Herpetofauna trapping in aquatic environments usually involves hoop net traps and floating basking traps. These are effective, can be used with a variety of bait, and maintain some portion of the trap above water so the turtles can surface to breathe.

A wildlife exclusion barrier is typically installed prior to trapping to prevent transient individuals and gravid females from returning to the habitat in the time between trapping and remediation/redevelopment activities. Timelines for effective trapping vary by site but can take anywhere from two weeks to several months to complete. For on-site habitats that remain undisturbed, regulatory agencies usually require a wildlife barrier between occupied areas and ongoing redevelopment areas. These include standard wildlife barriers made up of silt fence backed by metal chain-link fence and aquatic barriers consisting of silt curtains weighted with chains to ensure contact with substrate and prevent movement of species into the portions of the open water being impacted. If not installed properly and inspected regularly, these types of barriers can fail, and species conflicts can occur; all of which can lead to costly project delays.

This project resulted in the relocation of more than 400 native turtles from man-made industrial areas to natural habitats. The results met the expectations of the stakeholders outlined at the outset of the project, satisfied the permitting requirements, and fulfilled the project proponent’s expectations.

Brownfield sites can be successfully redeveloped, but early coordination with all stakeholders and special attention to protected species is essential.

Our case study showcases a site that initially met all the requirements for redevelopment, then encountered some challenges with a protected species, and ultimately was able to navigate a pathway to success.

1  Tarr, David G. “The Steel Crisis in the United States and the European Community: Causes and Adjustments.” In Issues in US-EC Trade Relations, edited by Robert E. Baldwin, Carl B. Hamilton, and Andre Sapir. University of Chicago Press, 1988.

Christine Miller
Christine J. Miller is a Biologist and the Natural Resources Lead (Northeast) at GHD. She has 20 years’ experience working as a consultant supporting the private, nonprofit, and public sectors on a variety of projects. Ms. Miller’s skills include the design and implementation of ecological field studies related to habitat assessments and presence/absence surveys. She also has experience in the identification, classification, and delineation of… Read More

Benjamin Langey
Benjamin J. Langey is an Environmental Scientist at GHD with more than five years’ experience working as a consultant supporting the private, nonprofit, and public sectors on a variety of projects. Mr. Langey’s skills include wetland identification; water quality assessment; habitat assessments for a variety of rare, threatened, and endangered flora and fauna; freshwater biology and ecology; as well as environmental site investigation and… Read More

Scott Bush
Scott E. Bush is a Senior Wetlands/Ecological Scientist at GHD. He has more than 30 years’ experience as a consultant working for the private, nonprofit, and public sectors. Mr. Bush is proficient in plant identification, wetland hydrology investigations, and soil analysis required for wetland-related studies. He regularly works on projects requiring federal and state wetland/ecological permitting and is familiar with applicable state and… Read More
More Articles Like This
Business and Biodiversity: Closing the Gap Between Ambition and Action
A New Biodiversity Paradigm for Business
Protecting & Promoting Natural Systems: A Crucial Step Forward for Business & Community
9 Conservation Principles: Fostering Collaboration for Nature Positive Outcomes
How Business & Finance Can Contribute to a Nature Positive Future Now 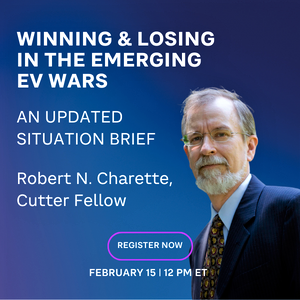