By San Murugesan
Posted May 12, 2021 in Cutter Business Technology Journal 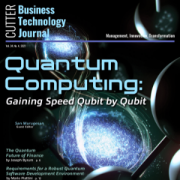 This year marks the 75th anniversary of the first general-purpose electronic digital computer. Secretly developed by the US Army and the University of Pennsylvania, the ENIAC (Electronic Numerical Integrator and Computer) was unveiled to the public in February 1946. On the eve of the announcement, the US War Department put out a press release hailing it as “a new machine that is expected to revolutionize the mathematics of engineering and change many of our industrial design methods.” Electronic digital computers did, of course, transform engineering and mathematics, along with every other conceivable domain, including politics and spirituality. There have since been amazing advancements in computing power, storage capacity, miniaturization, and affordability.

However, despite immense progress in computing power and usage, there are several pressing computa­tional problems that even the most powerful computers can’t solve. These range from integer factorization and optimization to molecular simulation, weather fore­casting, and cryptography. Even the most advanced supercomputers require several years to solve some of these problems.

We’re also reaching the physical limits of silicon-based computers and encountering manufacturing/reliability issues at a sub-nano scale, making further increase in their computational capabilities more difficult. To address these issues and continue the exponential growth in computing power that we’ve become used to, we must adopt a fundamentally different way of processing information.

In recent years, researchers have turned to radically different computing paradigms, such as quantum computing, molecular computing, and nature-inspired computing. Of these, the most promising and advanced is quantum computing, based on the principles of quan­tum mechanics. Quantum computers can tackle problems that are unsolvable with today’s classical computers. For instance, Deutsche Börse Group’s quantum computing pilot application to model enterprise risks cuts computation time from 10 years to 30 minutes.

As it opens up new realms, quantum computing is gaining increasing interest among IT and non-IT industries, researchers, and governments. It is fast evolving, and visionaries predict that quantum computing will be a major driver of innovation and advances in a wide range of disciplines over the coming decades. It’s time to look at the emerging quantum computing landscape and recognize its incredible promise.

Quantum computing is a fusion of quantum physics and computer science and an entirely new way to think about computation. It significantly speeds up the proc­ess of solving complex computations by exploiting the fundamentals of quantum mechanics.

The concept of quantum computing is not new, though. Its beginnings go back 40 years to the first Physics of Computation Conference, organized by the Massachusetts Institute of Technology (MIT) and IBM, attended by nearly 50 computing and physics researchers.

Today’s classical computers encode information in bits — binary digits that remain in one of two states: 1 or 0. Quantum bits (aka “qubits”) can exist as a super­position of both 1 and 0 that are finally resolved one way or the other when measured. Quantum computing also exploits other quantum mechanics properties, such as entanglement, in which a change in the state of one qubit affects or influences the other, even at a distance. These properties empower quantum computers to solve certain classes of problems more quickly and efficiently than classical computers.

Quantum computers can process massive, complex data sets and handle computations that involve a seemingly unlimited number of variables. Examples include com­bi­natorial optimization (minimizing or maximizing an objective function), differential equations (modeling behavior of complex systems such as fluid dynamics simulations for automobile or aeronautical designs and molecular simulations for drug discovery), linear algebra (machine learning tasks involving matrix diagonalization with applications in risk management, finance, and DNA sequence classification), and factor­ization (encryption and cryptography). These are all considered quantum-advantaged problems because they can easily be solved by quantum computing. Quantum computers have promising applications in such industries as pharmaceuticals, chemicals, financial services, agriculture, healthcare, cybersecurity, and quantum artificial intelligence.

Currently, anyone can access quantum computing as a service through commercial cloud computing platforms from Amazon, Microsoft, Google, and others, allowing them to experiment with the technology and test new applications. Scientists and engineers worldwide will soon be able to make use of Sandia National Laboratories’ Quantum Scientific Computing Open User Testbed (QSCOUT), eliminating the cost and restrictions associated with commercial testbeds.

Quantum computing is at an early stage, posing implementation and reliability challenges to developers, but intense interest among a variety of stakeholders should lead to major developments in the next five years or so.

This issue of Cutter Business Technology Journal (CBTJ) includes five articles that, together, provide an overview of quantum computing essentials.

Both hardware and software are necessary to achieve the promise of quantum computing. In our next article, Mario Piattini outlines various quantum computing programming languages and the requirements of quantum software development environments. He also introduces quantum software engineering, identifies two of its key challenges, and discusses how they can be addressed. Piattini emphasizes the need for an integrated approach to quantum hardware and software R&D, quantum software education and training, and collaboration between industry and academia. As an example of such a collaboration, he describes an initiative called “aQuantum.”

Despite the progress in quantum computing and promising applications in several key sectors, many professionals and IT business executives are skeptical about its prospects and are not paying much attention to it. “Quantum computing is going to make a reality of the impossible sooner or later ... it very much seems like a question of time,” observes Cutter Senior Consultant James Mitchell in his article. He argues that it is imperative for IT professionals and executives to be aware of these types of upcoming computing capabilities and be prepared to embrace them.

In our final article, Muhammad Usman examines ongoing developments in quantum computing: hardware, simulations and error correction, algorithms and applications, and post-quantum secure commun­ication. He also outlines anticipated progress in the quantum computing landscape and looks at the notion of quantum supremacy.

Clearly, the quantum computing race is already under way. Although still a nebulous concept to many IT professionals and business executives, it’s time to examine its near- and long-term potential by placing it on strategic business and IT roadmaps. Hype concerns and current limitations aside, the potential of quan­tum computing to radically disrupt a wide range of industries is real. Quantum computing could drive the information revolution in ways unimaginable thus far. As some are fond of saying, there are no old roads to new directions, so it’s up to us to create the quantum landscape if we want to reach the quantum age. We hope this issue of CBTJ inspires you to explore quantum computing further and encourages you to harness it to address crucial real-world problems.