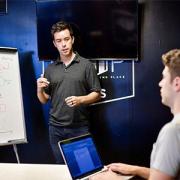 While the software industry is currently grappling with ideas of complexity and resilience, there has been very little in the way of concrete actions or activities that software engineers can use to actually design systems. Residuality theory answers this need and draws on complexity science and the history of software engineering to propose a new set of design techniques that make it possible to integrate these two fields. It does this at the expense of two of the most important concepts in software design: processes and com­ponents. Moreover, the embracing of complexity science quickly points out that the process-component mapping that forms the backbone of conventional thinking in software engineering is, in fact, the reason behind systemic failure in enterprise software.

Identifying processes, eliciting requirements, and the rapid mapping of these two components are akin to designing cars based on tire tracks in a muddy field. Processes and components are what we see on the surface, but they are a byproduct of the business system execution. The problem is that designing systems has focused on trying to replicate the appearance of other established systems — much like the infamous cargo cults building airplanes of straw — mimicking what was seen but without any real understanding. Componentization can thus be categorized as sympathetic magic.

Residuality theory, conversely, introduces the residue as the alternative building block of software systems. A residue is a collection of people, software functions, and the flows of information between them. It is what we imagine to be left of the system when it is impacted by a particular stressor — an event such as a fire, market crash, or product failure. For every stressor, a residue is created and augmented to be better able to survive the stressor. Therefore, designing an entire business system involves the integration of many, many residues. Processes and components previously believed to be first-order citizens of any model emerge from the integration of these residues. This completely changes how one should think about the design of systems. A software architecture can now be seen as a multidimensional structure of interrelated residues, rather than as a two-dimensional diagram of component relationships. Furthermore, traditional, linear risk management is superseded by early analysis of stress on the system with a focus on vulnerability rather than prediction. The residue forces the designer to work consistently with the software and the environment at the same time. This is a drastic change to the design process.

Residuality theory does the following:

The result is a stack of residues that have relationships to each other, and a new model, or view, of the system emerges. Residual analysis arrives at groupings of functions, components that allow for the execution of business processes. We haven’t partaken in any of the rituals of componentization, yet we have designed something that is responsive to the environment around it.

[For more from the author on this topic, see “'There Is No Spoon’: Residuality Theory & Rethinking Software Engineering.”] 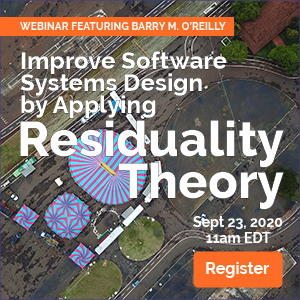