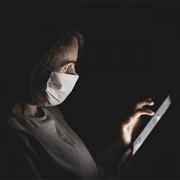 "We learn from history that we learn nothing from history," or so wrote Irish playwright George Bernard Shaw in The Revolutionist's Handbook

The swine flu pandemic gives us an opportunity in real time to see how accurate Shaw's observation is in practice, especially in regard to "near misses."

For instance, I read with continuing interest the effects of the swine flu pandemic in the UK and elsewhere and the relative lack of interest in the subject here in the US. For example, in Argentina, the swine flu seems to have a markedly higher mortality rate than reported in other countries, making scientists wonder whether the virus there has mutated in some way. The latest reports are that rate of infection seems to be slowing in Argentina, so the virus (and possibly the concern about the mutation) may be subsiding there, at least for the moment.

The UK's central and local governments are trying to walk a fine line between keeping citizens fully informed and encouraging panic. Home Secretary Alan Johnson, for example, said that the swine flu is a bigger threat than terrorism, while the Exeter City Council announced plans to use 19th-century catacombs as a temporary mortuary if the mortality rate significantly increases. At the same time, other senior government officials say that people "should carry on leading their lives as normal," "stay calm, don't panic and take precautions," and "Britain is very much open for business," even as airlines screen passengers for swine flu.

The mixed messages have caused confusion, which is no doubt why pharmacies in the UK are reporting runs on surgical masks, thermometers, and the like.

The House of Lords science and technology committee this week also criticized the government for delays in setting up the national pandemic flu service and failing to stress test the entire UK response capability as it had promised to do after the first wave of swine flu hit the UK last winter. While the Lords committee praised the UK for being quick to stockpile antiviral drugs, in the above two cases, the UK government didn't apparently follow up on its earlier swine flu near-miss lessons.<

Australia too has been hard hit for the past two months, but the early panic there seems to have subsided. As one writer describes it, swine flu is now just a mundane part of the landscape. It may be that swine flu hit along with the seasonal flu, so the separate "identity" of the flu wasn't so obvious. It just kind of blended into the overall background of people getting the flu.

Also, Australia has started the first clinical trials of swine flu vaccines, so it is likely to be in the forefront of finding what does and doesn't work. If the vaccines prove ineffective, it will be interesting to see what the reaction will be, not only in Australia where the trials gave comfort to the populace that something was being done about it, but also in the rest of the world.

Here in the US, while the swine flu has spread slowly but consistently with more than 300 deaths reported, the general news reporting has been rather short and perfunctory about the subject, unlike earlier in the year, when it was hyped by one and all, 24/7. For example, few can forget US Vice President Joe Biden's comments in a national television news program in May in which he said that he told his family not to use subways or take commercial flights in the US for fear of catching the flu.

Federal, state, and local officials are watching closely what is happening in the rest of the world and claim to be learning the lessons not only there but also from earlier in the year when everyone seemed to overreact and actions were uncoordinated and confusing (see, "A Flu Pandemic: To Risk or Not Risk — That Is the Question," 7 May 2009). The US government in early July gave out grants totaling some $350 million to help hospitals prepare for an overload of flu cases and to help states pay for flu vaccinations; the government has more than $7 billion still available in emergency money available to fight a pandemic if necessary. States and local governments are looking at what they will do if swine flu hits schools this fall. New York City, for example, is currently preparing for a winter resurgence of the swine flu and is ready to cancel big gatherings and to stagger work hours if necessary.

The US Center for Disease Control (CDC) says its models are predicting that the swine flu will peak in the US in October, although it also says that its model may be wrong. It is a healthy recognition that the CDC's earlier beliefs about how the swine flu would spread and its mortality rate were way off, and therefore, it would be wise to be cautious.

How well US businesses are preparing for the swine flu is harder to determine. In the UK, the swine flu's rapid spread seemed to have caught businesses there off guard, even though they were warned by the government to prepare months ago. Government and private organizations are telling UK businesses they now have less than six weeks to get their plans in order before the seasonal flu hits along with the resurgent swine flu. However, that warning may already be too late.

My informal polling of US business colleagues has found little in the way of formal plans for a major outbreak this autumn and winter. The spring's swine flu outbreak, subsequent panic, and then the general feeling that the swine flu was all much ado about nothing seems to have create a mood of ambivalence toward contingency management planning.

I asked the manager of my local McDonald's, for instance, if she had received any special instructions from corporate about the swine flu. She told me that their store has been instructed merely to send home workers exhibiting any symptoms of sickness. That was about it. The manager's greater worry, she told me, was that customers who are sick won't stay home.

From my vantage point, I think most US businesses have taken, after the spring's swine flu near miss, a wait and see attitude — much like their UK brethren. In fact, if you Google "swine flu" and "contingency planning," or other key terms, you will be hard pressed to turn up much in recent news.

Most business managers tell me they are hoping that if an outbreak does hit, it won't be too bad. That may not be such a good strategy. For, as Ben Franklin said, "He that lives upon hope will die fasting."

Robert Charette
Robert N. Charette is a Fellow with Cutter's Business Technology & Digital Transformation Strategies practice. He is also President of ITABHI Corporation and Managing Director of the Decision Empowerment Institute. With over 40 years’ experience in a wide variety of technology and management positions, Dr. Charette is recognized as an international authority and pioneer regarding IT and systems risk management. Along with being a… Read More
More Articles Like This
How Swine Flu and Other Big-Bet Projects Require Honesty
Pandemic Redux
SOA: Architecting Confusion
Second-Generation E-Business Reigns
Finding "Core Competency" Without the Confusion