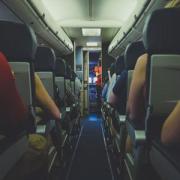 People’s increased mobility, facilitated by air travel, has resulted in the increased spread of contagion across geopolitical boundaries. A growing awareness that bioterrorism agents could spread in the same way has raised the level of concern even more. Many practitioners and researchers agree that contact tracing, which is the identification and locating of people who may have been in contact with an infected person, represents an important factor in mitigating the spread of a pandemic.

Transport networks, whether in the air, at sea, or on land, are continually expanding in terms of distance covered, speed of travel, and the volume of both passengers and goods carried. The increasing use and affordability of passenger air travel has contributed not only to people’s growing mobility, but also to the increased transmission of infectious diseases, such as influenza, tuberculosis (TB), and SARS, as well as a multitude of zoonotic diseases. In addition, the increased awareness of bioterrorism agents and their potential spread via air travel has caused public health agencies (PHAs) to reevaluate the potential spread in flight of these agents.

According to the World Health Organization (WHO), air transport presents a key challenge to preventing the international spread of health risks. In Europe in the 1300s, it took more than 10 years for the deadly Bubonic plaque to spread. Today, a person can travel almost anywhere in the world in a day, and a passenger can carry a fatal strain of avian flu from China to Europe within 24 hours. Indeed, the European Centre for Disease Prevention and Control (ECDC) has stated that air travel was behind the introduction of the influenza A (H1N1) strain into countries that had not been primarily affected previously. Moreover, airlines will likely be a major component when, not if, the next pandemic occurs.

As a means of controlling pandemics, the WHO has laid down guidelines to assist public health agencies in tracing airline passengers. As a background to this process, consider that if a PHA receives a report of a person suffering from an infectious disease, it is the responsibility of the PHA to perform a risk assessment to determine whether any other people are at risk of acquiring the disease due to contact with the infected person and to perform “contact tracing” if needed.

Contact tracing is defined, by the ECDC’s “Risk Assessment Guidance for Infectious Diseases Transmitted on Aircraft” guideline, as “an investigation procedure aimed at acquiring contact information in order to approach contacts that were potentially exposed to pathogens,” and by the European Parliament as “measures implemented in order to trace persons who have been exposed to a source of a serious cross-border threat to health, and who are in danger of developing or have developed a disease.”

The contact tracing of infected or at-risk airline passengers falls under the remit of PHAs that are, in turn, guided by emergency management (EM) practitioners. The current process is that data collection is facilitated by EM practitioners and subsequently collated by PHAs. The EM lifecycle consists of four phases: miti­gation, preparedness, response, and recovery. Contact tracing pertains to at least two of those phases: preparedness and response. During the preparedness phase, it is incumbent on PHAs to have the necessary protocols in place to quickly identify an at-risk passenger. Once a threat has been identified, these protocols are acted upon during the response phase.

Information systems, normally complex and multi­faceted, have a critical role in EM. Such systems consist of multiple stakeholders and require decisions to be made under pressure, in a timely manner, and with valid information. To aid this critical role in EM processes, information system tools have been developed to facilitate decision making and are used by emergency responders and decision makers during the phases of the EM lifecycle. These tools are paving the way for a digital version of contact tracing to be used as a decision-making tool.

What Can Be Done?

Because of the multifaceted response to an infectious disease outbreak and the possible political, economic, social, and healthcare impacts of an outbreak, it is vital that resources are appropriately allocated, in parallel with the timely dissemination of consistent information. The digitization of contact tracing can play a significant role in providing information for identifying and locating passengers at risk from a biological threat, in a timely manner, and using valid data.

In general, PHAs require quick access to passenger data, which means without any significant time delay. The time slot open to initiate and perform contact tracing depends on the incubation period of the specific disease involved and the time left to apply public health measures. For most infectious diseases, the incubation period and the time left to apply such measures is short, further underscoring the need for prompt and accurate contact information. Public health and aviation sectors, together with other stakeholders, must manage public health events in air transport to avoid the international spread of disease.

To assist with contact tracing, WHO developed a ‘’passenger locator form’’ (PLF), which currently exists in paper format. The UN’s International Civil Aviation Organization’s “Guidelines for States Concerning the Management of Communicable Disease Posing a Serious Public Health Risk” states that the PLF “provides an appropriate method of rapidly collecting passenger contact information: aircraft operators should determine if the PLFs will be kept on board, or at all destination airports. Depending on the specific hazard, the number of PLFs needed may vary, from a few to one for each passenger.” The inference here is that paper copies of the PLF should be kept at airports and on airplanes, to be prepared if and when they are needed. It may be necessary to acquire the data of only a small number of passengers (those in an at-risk area of the airplane), or it may be that the data of all passengers onboard needs to be captured.

In most cases, once a public health threat has been identified, the airline involved would be asked for its passenger manifest, which is collected in a digital format, to aid with the contact tracing of the passengers on that flight. The passenger manifest usually consists of a shortened version of the passenger name record (PNR), and includes the passenger’s name, seat number, and dietary requirements. It can take a few hours to a few days to receive this information, which then needs to be analyzed, leading to a delay in effectively identifying those at risk from a biological threat.

A PNR consists of information provided by passengers and collected by air carriers during reservation and check-in procedures. Noncarrier economic operators, such as travel agencies and tour operators that sell package tours making use of charter flights, also collect and process PNR data. PNR data may include several different types of information, such as travel dates, travel itinerary, ticket information, contact details, baggage information, and payment information. The PNR data is collected for the sole use of the airline, and in many cases lacks vital contact information, including addresses and contact telephone numbers.

In many cases, the only data from PNRs that is of use to public health authorities will be names and nationality information. Many countries do not have the ability to acquire contact information for passengers from passport numbers. Although a telephone number is often requested in the context of the flight booking procedure, this is not a requirement, and the accuracy of the provided information is unknown. It is therefore often problematic to trace passengers using the PNR information alone.

Delays in effective and efficient contact tracing result in the need for a significant increase in resources, such as vaccines and human resources, as EM practitioners must deal with a larger geographical spread (as those potentially exposed continue to travel) and an increase in the number of people potentially exposed. Delays can also result in increased socioeconomic costs, such as increased demand on public health due to retrospective identification of at-risk passengers. In the worst case, delays can potentially result in an increased loss of life.

The quality of the passenger data collected for analysis, from both the PLF and PNR, also poses challenges. More often than not, the data is inaccurate and incomplete, which frequently leads to delays in identification and incomplete tracing of potentially at-risk contacts. Identifying and locating exposed persons through contact tracing is an important procedure during the containment phase of an emerging communicable disease, which forms part of the EM response phase.

Barriers to the identification of at-risk passengers include the current paper-based process, noncollabo­ration between the airline industry and PHAs, ques­tionable data validity, and privacy laws in multiple jurisdictions. The digitization of this process will allow for an enhanced digital version of contact tracing that will have the capability to be linked to both airline data systems and to public health data systems. Digitization, along with the necessary legislation, should greatly reduce, if not negate, these current barriers.

[For more from the author on this topic, see “The Digitalization of Infectious Disease: Preventing Biological Threats in the Sky.”]

Michael Gleeson
Michael Gleeson is a lecturer in the Department of Business Information Systems at University College Cork (UCC), Ireland, and a research support officer for UCC’s Centre for Resilience and Business Continuity. His areas of interest include mHealth, emergency management decision support systems, data visualization, and software application development. Mr. Gleeson believes that evolving health information systems will revolutionize health and… Read More
More Articles Like This
The Digitalization of Infectious Disease: Preventing Biological Threats in the Sky
Back to Business: Social Distancing and Contact Tracing in the Workplace
Back to Business, Part II: Social Distancing and Contact Tracing in the Workplace
A Data-Driven Approach to Managing COVID-19
Contact with Local Government Concerning Y2000