Lou Mazzucchelli is a Fellow of Cutter's Business Technology & Digital Transformation Strategies and Data Analytics & Digital Technologies practices and a member of Arthur D. Little's AMP open consulting network. He provides advisory services to technology and media companies. He will lend his broad expertise (and considerable wit) to Cutter Summit 2022 as its Moderator. Recently, Mr. Mazzucchelli was the coordinator of Bryant University’s Entrepreneurship Program, where he retooled and taught senior-level entrepreneurship courses. He mentored the 2017 CEO National Entrepreneur of the Year. Early in his career, he spent 13 years leading Cadre Technologies, a pioneering CASE tools company that he founded in 1982, which grew to become one of the top 50 US ISVs before its sale in 1996. During this period, Mr. Mazzucchelli was listed in the “Top 200 in the Software Industry” by Software Magazine and was a member of the Airlie Council, a group of US software engineering experts and thought leaders empanelled by the US Congress to drive reform in software development and acquisition practices.

Since his work at Cadre, he has held various positions, including Venture Partner at Ridgewood Capital, where he helped build and manage their technology portfolio; interim CEO at LightSpace Technologies, a pioneering 3D visualization company; and Director of Asure Software, a US public company. Prior to these roles, Mr. Mazzucchelli served as a technology investment banker and equity research analyst at Gerard Klauer Mattison. He was once named to the Wall Street Journal all-star team and was one of nine “Home-Run Hitters” analysts (out of 2,400) recognized for his stock-picking performance. Mr. Mazzucchelli began his career in data communications, moving to IT management and consulting before founding Cadre. He can be reached at experts@cutter.com. 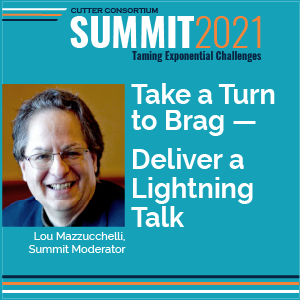 ...The task for building such an information system under strict time and budgetary constraints is daunting, but has been ameliorated by exploiting our "access to Cutter experts" during all phases of project planning and implementation. One critical element for success is having access to the Cutter body of knowledge and its expertise.