The Art of Mindful Management in the Age of Cognitive Computing 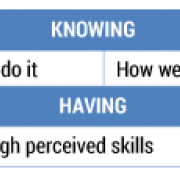 Robert Ogilvie takes a broader look at some of the themes already developed and considers the likely role of cognitive computing in the near future. He suggests that automation has gone through three phases: a robotic phase, in which computers performed rote tasks; a social phase, in which computers have facilitated communication and collaboration; and a cognitive phase, in which computers are learning to use knowledge to solve intellectual problems. He alludes that most of the new cognitive systems will interact with and aid human performers. Rather than replace human managers, Ogilvie implies, cognitive computing applications will make existing managers more knowledgeable and better able to respond to a broader range of challenges. He goes on to offer an inspiring vision of cognitive computing applications that help individuals and teams focus their attention on the challenging ­problems that are really worthy of consideration.