Learning to Lead Collective Creativity, Part II: Leading So That No One Is Following 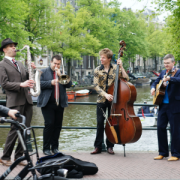 In our previous Advisor (“Learning to Lead Collective Creativity from Miles Davis”), we considered jazz legend Miles Davis’s minimalist management style as an example of leading collective creativity through the focused energy of presence. By guiding attention to the intensity of the work, he made space for musicians to alternately take the lead and to develop their responsiveness to one another and the unfolding event of music. We suggested his leadership style enabled the musicians to achieve “ensemble,” a particularly immediate and interdependent form of collaboration, which enables a group to act as one coherent responsive entity that is greater than the sum of its parts.

When “ensemble” happens in the creative groups we’ve studied — such as musical and theater ensembles, software developers, and design and product development teams — we’ve noticed other unusual demonstrations of “leadership.” Often, groups assert a “leaderless” approach, in which leadership isn’t an assigned role or position, but a series of actions or behaviors that enables collective creativity and can be enacted by every member of the team. Indeed, in some groups, it’s imperative that every member participates in leadership actions and is prepared to take the lead at any moment.

Let's take a look at another musical ensemble for some brief examples: the Guarneri String Quartet. This “leaderless” group of four is known for its ability to pass leadership deftly and flexibly from person to person, through a more or less “invisible” process of communication. The group is also one of America’s most honored and enduring string quartets, with more than 40 years tenure and a string of award-winning recordings. Here are some ways they enact leadership:

Teams of people capable of working as an ensemble have a lot to offer: they are extremely adept at responding to shifting contexts — such things as new information, new resource constraints or commercial opportunities, customer feedback, even shifting team membership — and incorporating these factors into their work; turning constraints into sources of ideas and inspiration. Because the work of an ensemble is highly interdependent and their actions emerge from the collective context, the outcomes they produce have a high degree of coherence. This approach differs from achieving coherence because everyone agreed up front what the outcome should be. It allows for heterogeneous perspectives, creative conflicts, and the trial of many seemingly conflicting ideas to reach the best outcome — “best” because it is most suitable to the context.

Another benefit of ensemble is the group’s collective ability to adapt rapidly to evolving contexts. Individual leaders have a more limited capacity than their collective. When a team full of people is empowered and engaged in leadership activities, no one person invested in his or her own agenda as “leader” can slow the team down.

In our next Advisor, we will take a look at entrepreneurial leadership qualities that are a part of this way of working.

Robert Austin
Robert D. Austin is a Fellow of Cutter's Business Technology & Digital Transformation Strategies and Data Analytics & Digital Technologies practices and a member of Arthur D. Little's AMP open consulting network. He is a former editor of Cutter Benchmark Review and a regular speaker at the annual Cutter Summit. Dr. Austin served as a professor on the faculty at Harvard Business School for more than a decade, and then as Professor of… Read More