To answer these questions, we conducted two surveys of 143 outsourcing professionals along with interviews of 48 people, including service automation adopters, providers, and advisors. From the interviews, we identified 20 adoption journeys. Although the 20 adopters in our study operate in different industries and adopted different automation tools, they reported common benefits. The benefits include doing more work with fewer humans, improving service quality, executing services quicker, reducing service costs, extending service coverage to 24 hours without shiftwork, increasing work team flexibility because software is configured to execute multiple processes and can be deployed where needed, increasing compliance because software is configured to follow regulations and is easily audited, and, most surprisingly, increased employee job satisfaction.

The accompanying Executive Report documents the RPA “triple win” — for shareholders, customers, and employees — emerging from many of the successful organizations we researched. Shareholder value included operational efficiency, high ROI in year one, better regulatory compliance, improved scalability, increased adaptability, a more flexible workforce, and delivering competitive advantage. Customer value included improved service quality, faster delivery of existing services, improved service consistency, round-the-clock availability, new services online quickly, and enhanced customer journeys. One surprise from our research was the employee value delivered by RPA. Employees whose jobs were affected by RPA commonly reported more interesting work after RPA (because “RPA takes the robot out of the human”), that they enjoyed learning new skills, and that their teams gained reputation and recognition from senior managers. We found many employees report­ing higher job satisfaction resulting from all the above. The positives seemed to be: liberation from dreary tasks, learning new skills, and, interestingly, becoming known as an innovator. In fact, many employees were very familiar with new technologies, not least because they had advanced consumer IT at home. They not only welcomed technology investment that improved their work mix, but were now getting credit at work for being involved in innovation. Job satisfaction increased as a result.

Service automation effectiveness is best demonstrated by real-life case studies. In the report, we detail eight RPA and CA adoption cases to show how automation was carried out with each organization and the multiple emerging benefits. The cases cover biotechnology, media, financial services, back-office services, utilities, telecom, and healthcare. The study demonstrates that RPA and CA are generic in their application and can be utilized across multiple sectors. In the case of RPA, these tools are best applied to standardized, mature, optimized, stable, rules-based processes that require deterministic outcomes. CA is used for unstructured data and in applying machine learning; as of yet, it is most frequently at the proof of concept or early pilot stage in client organizations, though our research suggests a much larger take-up will occur by mid-2018. The eight cases variously used Blue Prism, Automated Insights, Automation Anywhere, Redwood Software, IPsoft, and Celaton software and tools.

As of January 2017, SEB bank utilized IPsoft’s Amelia to help with two internal IT service desk functions: identity access management and knowledge management. These represented 15% of the call volume at the time. Following the success of that implementation, in December 2016, SEB launched the software as an additional channel to service external customers. It describes the initiative as a learning project conducted live with active customers.

In 2014, the Associated Press (AP), a US-based, multinational, not-for-profit news agency, automated corporate earnings reports using software from Automated Insights and structured data from Zacks Investment Research. Automation delivered multiple business benefits: service automation increased service volumes from 300 corporate earnings reports to 4,700 reports each quarter, while freeing up three full-time equivalents (FTEs) to work on more interesting news assignments. No unionized journalists were laid off because of automation. Moreover, for customers, the quality of reports improved as well as the timeliness and volume of reports.

By April 2015, UK-based telecom company Telefónica O2 had automated nearly 35% of its back-office services, yielding a three-year ROI of between 650%-800%. Its service automation capability was quite mature and broad in scope by this time. The software processed between 400,000-500,000 transactions each month in 2015, rising to over 1 million transactions by end of 2016. For some customer-facing processes like phone activation and SIM swaps, it reduced the turnaround time from days to just minutes. Subsequently, customer “chase up” calls were reduced by over 80% per year because fewer customers needed to inquire about the status of service requests.

A major European electricity and gas company, NPower, was the earliest adopter of service automation in our study. As of December 2016, NPower had deployed over 300 software robots to automate about 35% of its back-office work associated with meter management, customer billing, account management, consumption manage­ment, segmentation, and exception processing. The robots processed about 1 million transactions each month yielding an average ROI of 200% within 12 months of automation.

VHA, a US healthcare network of not-for-profit hospitals, provides services such as pooling procurement spend to negotiate better deals than any hospital could negotiate on its own. In 2014, VHA automated the extraction of detailed product information from the Internet to complete the procurement process. Within a few months of operation, over 360,000 product descriptions were automatically pulled from the Internet, freeing staff to focus on selling and revenue generation. The VHA reported a 6:1 ROI the first year and gave 49,951 hours back to the business in 2016.

Virgin Trains, a UK train-operating company partly robotized its customer inquiries process. Celaton’s inSTREAM was used to receive all incoming correspondence, categorize them into over 470 types, and route them to the appropriate customer service agent. The staff now works on more value-added tasks, including more time with customers and with business operations’ employees working on the frontline. The daily email processing time was reduced from 32 person-hours per day to four. Over the course of a week, by our estimate, that amounted to freeing up nearly six FTEs for more value-added work.

Xchanging is a provider of technology-enabled business processing, technology, and procurement services (and has since been acquired by CSC). In early 2014, Xchanging automated 10 processes in the insurance business while establishing a long-term governance and support competency. As of May 2015, Xchanging had automated 14 core processes, deployed 27 robots that processed 120,000 transactions per month, for an average total cost savings of 30%. Besides cost savings, Xchanging reported improved service quality, faster service delivery, and scalability. A major theme from the case is that the operations teams embraced RPA because it released them from dreary work.

In the next five years, we think that workgroups increasingly will comprise both human and robotic FTEs, and each will be assigned tasks for which they are ideally suited. The robots will very quickly extract, consolidate, and rearrange data for humans to make judgments upon. We are seeing this today, but in the future, the robots might not need as much pre-configuration or as much structured instruction. Many of the clients in this study hope to next tackle unstructured data with CA automation tools. They want robots to read unstructured text, such as text messages or emails, and decipher what it means, and also apply machine learning. However, to date, we have found cognitive automation a promising but still immature area.

Mary Lacity
Mary C. Lacity is the Curators' Professor of Information Systems at the University of Missouri-St. Louis and a Visiting Scholar at MIT CISR (Center for Information Systems Research). Dr. Lacity has also held visiting positions at the London School of Economics, Washington University, and Oxford University. She is also a Certified Outsourcing Professional, coeditor of the Palgrave Series: Work, Technology, and Globalization, and Senior Editor of … Read More 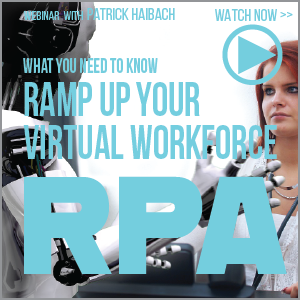