Underdogs to “Wonderdogs”: Technology Trends for 2021 & Beyond 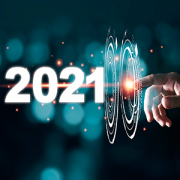 In this Executive Update, we take a closer look at seven underdog technologies that might have a major impact on our personal and professional lives in 2021 and beyond. A few of them have made some lists, but, by and large, they’re missing. These technologies are:

3D technology is broadening its impact — and fast. It’s an underdog today, but in a year or two, it will be a celebrity impacting all aspects of modeling, simulation, printing, and manufacturing across various industries, including education, medicine, and construction. 3D models will continue to impact video games, architecture, engineering, and advertising. 3D manufacturing already generates simple and complex objects, including, among many others, automotive parts, eyewear, prosthetics, sculptures, and even firearms. How does this technology fail to make any top 10 lists, especially when 3D tools are better, faster, and cheaper than ever before?

Fully homomorphic encryption (FHE) is a technology that makes a few lists but is generally way too underhyped. FHE is encryption without decryption, which means it enables “private” data analytics without demasking the data. In healthcare, for example, FHE enables analytics without violating the privacy of patients. It revolutionizes the way big data analytics are analyzed for explanatory, predictive, and pre­scrip­tive purposes. Microsoft has invested in FHE through its Simple Encrypted Arithmetic Library (SEAL) program. IBM and Google have also invested in FHE. The technology will eventually be standardized for widespread use. Definitely an important trend.

LC/NC development platforms make programming accessible to nonprogrammers. This alone should give LC/NC platforms superstar status, but they remain tucked in the world of software engineering. LC/NC platforms are fundamentally changing the way we build applications by reducing the gap between require­ments and development, between business and engineering. They accelerate development and open participation to lots of nonprogrammers previously shut out of the design and development process. How is this not one of the most impactful technologies of all time? How is it not on every top 10 list? Would computer-aided software engineering (CASE) and rapid application development (RAD) tools have made the lists when they started making ground? What about 4th-generation languages (4GL)? LC/NC platforms are far more impactful than CASE, RAD, or 4GL. They’re anything but underdogs. [Editor's Note: For more on LC/NC development, register for the upcoming Cutter webinar Low-code/No-code-enabled Citizen Developers: Catalysts to Innovation.]

Just as “citizen developers” love LC/NC platforms, programmers love GitHub and other open source code repositories. GitHub makes it easy to contribute, document, manage, and integrate code in an open source platform that’s exploding in size and use. It also serves as an online programming résumé for those seeking fame and fortune as software engineers. GitHub makes everything faster and cheaper. So why isn’t everyone talking about GitHub? Microsoft obviously felt GitHub was important enough to buy it for US $7.5 billion. It’s also the world’s greatest code repository with over 40 million users and 190 million repositories. So add it to the list of underdogs under­represented in most top 10 parades!

Immersion happens today mostly through augmented and virtual reality (AR/VR) applications that ideally occur via headsets designed to optimize the immersive experience of customers. While AR and VR are available on other devices, the experience is less fulfilling. So where’s the underdog? AR and VR will become cost-effective for personal use as professional applications expand across gaming, education, and retail domains — and beyond. Headsets will eventually yield to 3D immersive laptop/desktop displays, rivaling the headset experience, even as headsets become smaller, faster, and cheaper. Micro-optical lens technology will enable this experience, which means that immersion can occur on screens — even heads-up displays on windshields. Partial or full immersion will transform all forms of entertainment, especially sports. Imagine the range of possible applications. So how could immersion still be an underdog?

Bitcoin was doing just fine until PayPal added some serious credibility to both its use as a currency and as an investment opportunity. Bitcoin millionaires and billionaires aside, there are now serious investment opportunities in Bitcoin, Ethereum, and other cryptocurrencies that might make sense for a highly speculative portfolio. Cryptocurrency exchanges such as PayPal and Coinbase enable such investments. But perhaps even more important is the role that cryptocurrency will play in fast, secure, and borderless transaction processing. The number of retailers and Internet sellers that accept cryptocurrency for payment is growing — and will continue to grow. An underdog? Not for long. As more companies accept cryptocurrencies, and more investors bet on cryptocurrency, it will graduate to the top 10. Perhaps the best clue is the current availability of Bitcoin gift cards.

Research organizations love celebrity technologies. They’re easy to identify and hype. Many are, in fact, impactful in any given year. But what about the underdogs? Can they become wonderdogs? All it takes is evidence and, as always, a fair amount of packaging and messaging. But the best path to promotion is deployment. As more and more companies deploy these underdogs, the faster they’ll become wonderdogs. Maybe next year they’ll make the list.