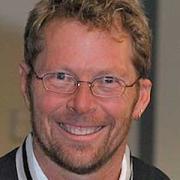 Agile is spreading and changing at such a rate that we are devoting a second issue of Cutter Business Technology Journal (CBTJ) to the topic. In the first issue,1 we examined the idea that we have entered the “post-Agile” age — an in-between period, where the original ideas from the Agile Manifesto2 have largely been incorporated into our culture, but what comes next has not yet formed clearly enough to be named.

Agile will never be fully adopted everywhere. Geoffrey Moore’s discussion of “crossing the chasm”3 examines why. He describes five attitudes toward any new idea. A small group, the innovators, will try anything new. A slightly larger group of early adopters will see the value and bring the new idea into their lives. Then there is a gap before a large mass of people, the early majority, accept the idea and start to adopt it. The late majority follow, slowly accepting the idea, but perhaps unwillingly. Finally come those who really don’t like to change, who resist the new idea until the very end, and who may never adopt the idea at all.

Traditional Agile has already passed into the late majority, following this rough timeline:

Thus, the next wave of Agile evolution is growing past the early adopters into the early majority, while the older, baseline Agile ideas are still working their way into large, traditional organizations. The current wave of Agile and post-Agile ideas involves taking the Agile concepts out of the IT department into HR, purchasing, sales, printing, restaurants, and even energy resource production (as we see in this issue). This wave of ideas involves directly tackling the question of culture: how do we run our organizations with radical transparency into everything from financial statements to personal salaries?

As we saw in the earlier CBTJ Agile issue, there are three big movements these days: (1) faster feedback, (2) the use of Agile outside of product design, and (3) simplification of the Agile concepts.

Modern product design groups demand quick feedback. They know that each decision is the foundation for many decisions in the future and that they cannot correctly guess users’ reactions. Each decision estab­lishes a direction for the future, so they want to check on these decisions immediately, before putting in additional work in the wrong direction. They are looking for “probes” into the workings of the users — just enough to get feedback. They cannot wait two weeks for a Scrum delivery to gather information on these directional decisions. Changing an organization to deliver daily probes into the world is not easy; it may be as difficult as it was to change the organization a decade ago, when the aim was demos every two to four weeks. It is being done by some organizations, but not many, and therefore represents “the cutting edge” of Agile.

The second evolutionary movement of Agile has taken it outside of software, and even outside of product design. Even though we wrote the Manifesto for Agile Software Development, we quickly realized that the Manifesto had much broader application. The Agile concepts suit any sort of initiative involving decision making. The Manifesto really is saying that people come up with ideas and make decisions collaboratively and that they need real feedback to correct and improve those ideas and decisions. In other words, “Agile” as a mindset and program suits any mental endeavor.

As Agile moved from the early adopters into the early and late majority, it became more decorated, compli­cated, and rule bound. The early adopters liked the simplicity of the Agile Manifesto and the space it gave them to talk to each other informally, to follow their instincts. People in larger organizations, however, wanted more clarity into the process, more detail, more repeatability across teams, more certainty and security in what they were doing. They requested, and got, clearer and more detailed protocols and ceremonies. This clarity came at a cost: less speed, less empowerment, less maneuverability — in short, less agility.

I believe this is not a failure of anything but simply a consequence of the forces acting within large organizations. And, while it is true and inevitable, the result is still less efficient and less agile. This is why high-performing Agile teams decry these additions and complications.

The third frontier of the new wave of Agile is the search for a way out of this dilemma — a way to make things simpler again, while still keeping all the benefits of Agile. My own work has been to boil the essence of Agile efficiency into just four words: collaborate, deliver, reflect, and improve. As you may recall from the previous CBTJ issue on Agile, I call these the Heart of Agile,5 which is really just a centering device that allows busy people to remind themselves of the few things that are really important. It has been interesting to see how these four simple words are, at the same time, easier to adopt than complicated formulas, allow more space for individual tailoring to circumstances, and open up new doorways for investigation.

Among the new doorways we have found are the importance of HR departments, salary discussions, annual appraisals, and executive bonuses. These are topics not normally associated with the concept of agility, but as you will see in this issue, the implications of working on collaboration directly affect many parts of the organization.

When you direct your attention to the topic of collab­oration, you discover very quickly that you need to improve the organizational culture. Collaboration turns out to be a fragile thing. It is based on trust, which is even more fragile, and its enemy is fear, which abounds in the workplace and is a potent killer of collaboration. Generally, we (I include myself here, as well as exec­utives and managers in most organizations) would like to avoid the tricky and painful topics of culture, trust, and fear. However, the best companies are work­ing on these topics — decreasing fear, raising trust, lowering punishment, and increasing listening and inclusion. Through these efforts, they get more ideas, faster feedback, and faster forward movement on their initiatives. Companies that don’t work on these topics will simply get left behind.

What Does It Mean to “Work on Culture”?

All initiatives these days are based on ideas and decisions, starting with a few idea initiators and sponsors, and growing through a network of workers until final implementation. Each person makes errors in decision making at the rate of one error every five, 10, or 20 decisions. Any initiative eventually depends on hundreds of thousands of decisions, built one on top of another. That means the final implementation, if done in the traditional big-bang or waterfall style, will contain thousands to tens of thousands of errors.

With an improved, high-trust, low-fear, low-penalty culture, we detect those errors — or any form of surprising bad news — as early as possible. This gives the team the maximum time to adjust for that unexpected bad news and to lose the least amount of time pursuing an incorrect or suboptimal direction. “All bad news early” is a good mantra.

We want people to look at all ideas with friendly but critical eyes, to find ways to express their thoughts without fear, and to receive information about mis­takes without damage. Creating such a culture means taking the modern concern for diversity and inclusivity seriously. It means teaching dominant people in the organization — whether senior technical people, managers, executives, or others with strong person­alities — to listen more patiently to those different from them, those who are quiet, shy, or fearful. It means changing reward structures so that members of the same team or organization are not in competition for the same rewards.

In our first article, Erik Schön describes what had to be done in a company of 2,000 people across 10 countries to introduce agility. He summarizes the company’s shift in three areas: from methods and tools to principles and mindset, from resource efficiency to flow efficiency, and from scattered experiences to continuous innovation. You will notice in his article his emphasis on first changing the mindset.

Next, Lisa May and Tamara Runyon take agility out of its normal domain of product development into the world of research, where its use is not at all obvious. They outline the cultural blockers, note the obvious mismatches to ordinary agility, and describe how they adapted both the ceremonies of traditional agility and their own culture to form an effective final mixture.

In the following article, Zuzana Šochová describes the transition from a traditional HR world to one that fits the new culture of the Agile organization. She discusses the shifts in recruiting, appraisals and reviews, salaries, and career tracks, and the difficulties facing anyone embarking on the Agile path. She closes with a dis­cussion of new leadership roles: leading, coaching, and facilitating.

Emilio Gutter then tells a personal story of embarking down this path. After outlining the benefits of his com­pany’s experiment with transparency, he discusses the difficulties with loss of power and control, slower decision-making processes, and what he calls “frictional costs,” when ordinary workers, not specialists, are making corporate decisions. He describes his com­pany’s approach to these difficulties.

In the final article, Simon Orrell takes us into another unexpected domain: production of energy resources. It is not obvious at the outset how embracing an Agile mindset might alter energy resource production rates, so his recounting of this story is especially interesting.

I trust you enjoy your reading.

1 See my coauthored article with Joshua Kerievsky and Andy Hunt in this issue (“Rebooting Agile”). 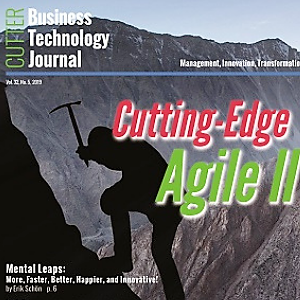 Explore out-of-the-box applications of agile practices in this Cutter Business Technology Journal issue with Guest Editor Alistair Cockburn. Available for purchase in the Cutter Bookstore. Save 20% with Coupon Code CuttingEdgeAgile2-20.

Discover new applications of agile practices in this "post-agile" age in this Cutter Business Technology Journal issue with Guest Editor Alistair Cockburn! Available for purchase in the Cutter Bookstore. Save 20% with Coupon Code CuttingEdgeAgile20.

Save 30% off both reports with Coupon Code CUTTINGEDGEAGILE30

5“The Heart of Agile” (https://heartofagile.com).